a Story by Jane Golden

The captain/presumptive owner of the fifty-four-foot trimaran was about sixty, weathered, and full of stories of far-away places and the people he had met. He looked like Spencer Tracey after a hard week of drinking and was in the middle of one of his many marriages, hence his sudden need to take the boat to the Keys. It only took an hour in a Fort Walton dive for him to buy enough beers to convince my roommate, me, and two guys from grad school to sign on as his unpaid crew from Destin to Key West.

In addition to the four of us, there was a perpetually sea-sick boat mechanic. The captain hired him to keep the malfunctioning engine operational. It was a bad sign, one I missed, that we needed a full-time mechanic. He was a tall, skinny, quiet country boy from rural Alabama and white as a sheet. Each time the engine failed, which was all the time, he’d go below and then promptly get seasick. When he was topside, he burnt in the unrelenting sun. It didn’t take long for him to become miserable.

All of the signs that things may not be right were there within hours of our departure, beginning with nagging questions about ownership of the sailboat. When the IRS agents showed at the dock looking for the captain and we students were ordering rum drinks at the bar (on the captain’s credit card, of course), it should have made us wonder why our captain had suddenly vanished. Other signs appeared soon after, such as the lack of any working navigational system and the tales of ships he had lost off the coast of Cuba. The fact that he was crazy took longer to appear. 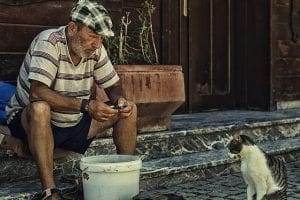 Image by Eren Demirci from Pixabay

But it was easy to ignore any bad signs on the spectacular summer morning when we cast off the dock lines and headed due south. Destin back then was a sleepy fishing town around a large natural harbor with emerald green waters and pristine white shores. In the ’70s there were no towering condominiums and no jet skis swarming its entrance like noisy, pesky mosquitoes. It was a town meant for those who wanted to get up at dawn and head out to fish. Small bait shops and chandleries once sat where the latest version of a Crabby Joes or four-story souvenir shops now sell food and wares to the hundreds of thousands of tourists. The quiet is gone, but the beaches remain the same – some of the most beautiful in the world.

We left with calm seas, a gentle wind in our sails, and not a cloud on the horizon. For endless hours we moved past one point on the chart to another with little to do other than adjust a sail here or there. Mostly, we lazed about, pleased with ourselves for snagging the trip.

The first days of the sail were a lot like summer camp in junior high when kids divide up into cliques. When they were talking at all, the Captain and the mechanic would go below and discuss the engine, which I gathered he was fixing in order to sell the boat. My roommate had cornered the guy she liked and spent her days with him. That left the other guy stuck teaching me the fine points of sailing, about which I knew little.

Then one afternoon, for no known reason, the Captain shattered the peacefulness. He angrily emerged from below with his old hat on like a throw-back from a 1940’s movie, eyes squinting in the sun, and summonsed us around him. Then he opened a large locker secreting an arsenal of weapons.

“Anyone tries to board we shoot to kill – do you understand that?” Our four startled heads bobbed up and down as he stared into our eyes.

“Do you know how to shoot weapons?” He asked us one at a time. I said yes, but it wasn’t true. I’d never even seen those types of firearms. Then he retreated back down below to do whatever he did down there.

Thereafter, the Captain became crazier bit-by-bit as the early windless days slowly progressed. I became his target for verbal abuse. From the time I refused to change course in order to use a sea turtle for target practice (he was bored) to blaming me for the mal-functioning compass – it had to be my near-by storage of canned goods – I was fast approaching the point of being our first-person over-board.

Making the tension even worse, the further south we sailed, the more unpredictable the weather became. August lightning-storms began to pop up around us, often sounding like rapid gun-fire.

Most storms, we simply out-ran or otherwise avoided, but for that one night. The black clouds came up so furiously that we had only time to drop and secure the mainsail. Our boat was forced off-course when the mizzen sail ripped and wrapped around the spreader. No amount of tugging would pull it down. It was then that I learned that multi-hulls could “pitch-pole”.

This phenomenon occurs when the wind gets behind and under the boat and throws its stern over the bow like a summer-salt. I was informed, matter-of-factly, that is when I would die. I learned all of that in the screaming moments when a lightning bolt lit the night, and we scrambled to contain the mizzen as we flew over the tops of the waves, mother nature seizing the upper hand.

It was then that the guy instructing me, the most capable of the sailors on board, wisely took over the helm, barking orders to try and relieve the pressure the wind was exerting on the boat. When he saw me clinging to a life-line as the boat slammed over the waves, he yelled to the others:

All the while, the useless captain was below calling the Coast Guard and yelling May Day over and over again. Occasionally I would hear a young officer say, “Take down your sails captain” and “What is your location, captain?” That last one was funny since the captain didn’t know where we were.

For hours, the boat maintained its forward momentum, continuing to surf unceasingly at the same speed as the storm, hurling us to some unknown destination, the pontoons occasionally digging into a wave and the wind lifting the stern, enough to make us hold our breath and pray.

And then…just as it always happens, the storm played out, and the seas began to calm. We would survive after all, but where were we? Given the wind direction and our lack of navigation, it could have been Cuba.

Our joy at seeing two fishing boats six hours later was short-lived. They only spoke Spanish and didn’t seem inclined to help a boat like us: ripped sails, exhausted sailors and a stupid captain. We probably looked like drug runners. Pointing toward Key West was the only help they could afford.

Before GPS or a functioning Loran C, our only option was to hold up a battery-operated transistor radio for directional signals. Our course was literally dictated by a small black radio playing the song Cocaine over and over again. If we sailed toward the direction of the signal and it got louder, then we assumed it was headed to the radio station on Key West.

By then we also didn’t have enough food, and as the cook, I was the culprit. I even saw my roommate and her guy-friend beginning to look at me like I was the outsider in a bizarre horror movie.

Image by Free-Photos from Pixabay

It’s no wonder that when our dock-lines eventually hit the harbor pier, I did what so many others who have been at sea for a while do. At the first opportunity, I jumped from the boat to the dock on wobbly sea-legs and landed right in the water, with jellyfish, seaweed, and smelly diesel. But, there would be no pity. Even with a banged foot, I was expected to help clean the boat while the Captain left to check on the potential sale.

That night, a well-fed and intoxicated Captain returned to the boat and gave us the evening “off.” Of course, the town was thirty minutes away, and I had less than five dollars. It wasn’t a happy moment for me when I discovered that my roommate had somehow rationalized using her father’s credit card to rent a hotel room and order room service for her and her increasingly close friend. Decades later, she feigns guilt at such a selfish decision.

Without other options, my new friend and I decided to hitch-hike to town for food. We mistakenly jumped into the car of a guy who announced he had to make a “business” stop at a trailer along the way.

Of course, it wasn’t okay in the least, but we were stuck and sat quietly in the back seat of his crummy car. After a maze of turns, he stopped to make his deal at a run-down trailer at the bitter end of a long sandy road through mangrove trees. I might not have recognized how dangerous the sailboat trip was, but I knew a drug deal was bad. 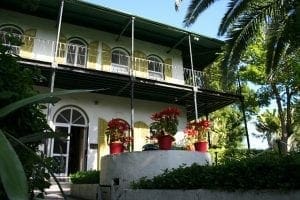 Image by zopalic from Pixabay

As soon as the tires on the car hit a paved road, we asked to be dropped off at the first possible restaurant. It was before the day of cute pink restaurants and shops on every corner. Colorful Key West homes were just ordinary shacks where people slept at night and left to go fish in the daytime. It was still an outpost town, filled with people who wanted to escape “normal” and its charm was an earthy, raw existence. Battered by storms, far from big stores and easy travel, it was an Ernest Hemingway kind of town – or at least the side of it that we saw that night.

Before I could take a bite out of my Cuban sandwich, paid for with the last of my money and placed before me on the worn Formica table-top, I heard the deafening sirens of a speeding police car. I ducked in fear as it jumped the curb outside my window and headed towards a man lying in a pool of blood on the nearby sidewalk.

I knew then that it was time for my Key West adventure to end.

“I want to go home,” I said with a sigh as I watched the scene unfold.

The next morning my friend and I secretly packed our meager belongings and went to town. Moe, the kind barber on Duval Street, cashed a $40.00 check for us and we took the first bus out of town. I guess some might think of us criminals for jumping ship, but we were more like trafficking victims managing an escape. 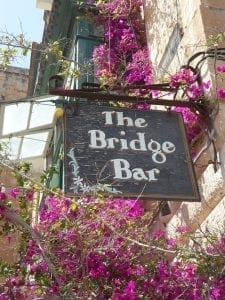 Image by M W from Pixabay

I still remember everything about the bus ride late that afternoon. As I sat safely in the vinyl Greyhound bus seat speeding north over the many bridges linking the Keys to the rest of the state, I soaked in the beauty of the mangrove forests, bougainvillea, and palm trees. I snapped mental pictures of the turquoise waters.

And before reaching the home of a friend in Coral Gables, just as the sun set over the horizon, washing the sky in bright orange, I nestled my head on my future husband’s shoulder and smiled in contentment. Key West was indeed beautiful, and I had been there.

This site uses Akismet to reduce spam. Learn how your comment data is processed.